I’m Don Horwitz, born a Jew, raised as a Jew, still a Jew, but viewed by many in my own faith as a traitor, and by many of my Christian brothers and sisters as one who doesn’t belong doing what I do. Believe me, I never thought in a million years that I would be leading Christians Care International at this point in my life, but who am I to argue with God?

So how did I get here?

It’s simply complicated and confusingly clear. God led me to lead a Christian ministry. It was His plan for me and my given mission to bring Christians from around the world together to stand with Israel and the Jewish people while building bridges of love and understanding between Christian and Jews. Easy right?

So lets start with the most common question I hear. How do I know that it was God who led me to do this? The short answer is, I was happy and working successfully in my television career of 33 years. I owned my own production company, won over 50 awards including 3 Emmy’s and never once thought about ever leaving or changing directions in my life. Simply put, I loved doing what I was doing.

I didn’t realize it at first, but it started at a young age. I grew up with my grandparents who ran for their lives during the Russian revolution. I witnessed the tormenting agony and pain that was seared into their souls as a result of the beatings and persecution that they endured while living in the Former Soviet Union. Also, many of my extended family members were tattooed Holocaust survivors who not only survived being tortured, starved and beaten until the edge of death, but then had to relive the haunting memories of the smell of burning flesh and the cries and screams of their children, family and friends who were being tortured, beaten and killed by the Nazis. Growing up with my family was a living lesson in how trauma affects a person’s brain and life and just how devastating the effects of Anti-Semitism and vicious hatred can be.

My next major lesson occurred as an adult when I adopted my 3 daughters form an orphanage in Irkutsk, Russia. They were 8, 10 and 14 years old when I brought them home and unbeknown to me, they were severely beaten, abused and abandoned by their drug addicted parents when they were 3, 4 and 7 years old. I was also unaware of how badly they were abused and neglected while living in the orphanage that was supposed to be their home and safe haven.

When my children first entered my home, I thought that they would be so happy to finally have parents who loved them and a house that they could call they own. Instead, they totally melted down and were unable to cope with their new environment. They began to cut and hurt themselves, attempted suicide multiple times and within a few years turned to drugs and alcohol to deaden their pain. Little was known at that time about how childhood trauma affects the brain so it was nearly impossible for us to get the help that my children so desperately needed. Our family was in crisis and we needed help.

In the midsts of trying to save and stabilize my daughter’s lives, I was approached by a Christian ministry who asked me to do television programs for them about their work in helping Jews make Aliyah who lived in Ukraine. My first response was “no”. They asked again and I said “no thank you, I do not produce religious programs.” They asked a third time and I said no again. They asked a fourth time, and I finally said, “ok, ok, I will do one program for you and that’s it!”  I  remember thinking at the time, why are these people so persistent! I don’t even know them.

The clincher came while I was working on the film in Ukraine. The director and founder of the ministry, a Christian man, began teaching me more about Judaism than I learned in 5 years of Hebrew school as well as from my own Jewish family. A Christian man did this! This Christian man, Phil Hunter would later become my mentor, teacher and the father figure in my life. He never tried to change me and respected me for who I was, his Jewish brother, beloved friend and hopefully his oldest son.

Phil and I were working on our 7th film together in Israel when I turned to him and told him that he looked tired and drawn. He assured me that he would rest and go on vacation with his family the following week. We parted ways and agreed that we would speak in 2 weeks.

Two weeks later, there was no word from Phil. I began calling him everyday, but there was no response. Finally, after days of calling, his daughter picked up the phone and informed that my beloved friend was in intensive care, dying from acute Leukemia. She told me that doctors are only giving him a few months to live. My foundation was rocked… this was the man who changed my life.

My Phil was taken away from me shortly after that. I was completely devastated. This wonderful and beautiful Christian man brought me to God in a way that I never thought would be possible in my life. He taught me about Judaism, about Christianity and how to rise up through love, understanding and respect.

A few months after Phil’s death, I received a shocking phone call from his family.  They asked me if I would take over the ministry. My first reaction was, how can a Jew run a Christian ministry? I told them I needed to think about it and pray about it. Then, it hit me like a hammer. God had put me on this path in my life. From my grandparents to my adopted children to Phil. It was God who was preparing me to not only take over the ministry, but training me how to take care of the elderly Jews who were beaten down and repressed, how to take care of traumatized children who have been abused, neglected and abandoned and how to raise people up to God through love, respect and compassion. It was God who was calling on me to help build bridges of love and understanding between Christians and Jews just as Phil had done with me.

You see, there are no coincidences in life. There is only God’s will. 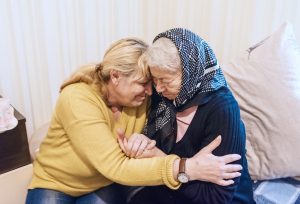